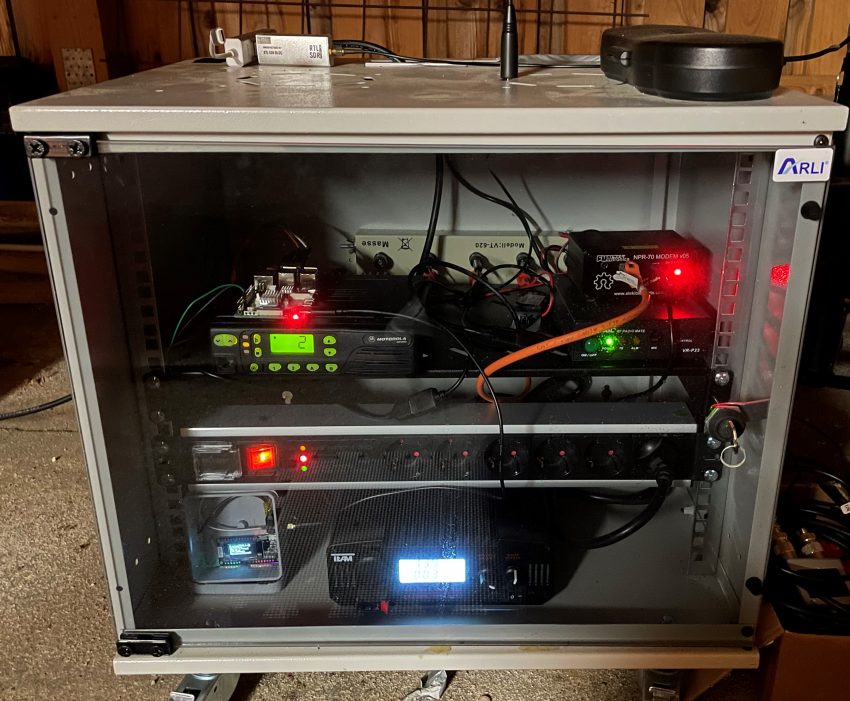 I am happy to announce that my 2m APRS digipeater and 70cm NPR HAMNet Gateway was approved by the Bundesnetzagentur. It was assigned the callsign DO0ZA. The 2m APRS part is already on air. The NPR part will follow soon. Since I love new and experimental technology, a LORA Aprs iGate is also present at DO0ZA’s location.

DO0ZA is located under the roof top of my garage at my home location in JN58ot Nassenfels. It took me nearly half a year to bring it to the current state. My goal was to build something own, not just buying a box and configure it.

I am using Direwolf as TNC for this project, no hardware TNC is involved. The entire system runs on a Raspberry 4 with Ubuntu 64 Bit. The setup is using a Motorola GM350 as transceiver, with my homebrewn PTT/sound interface.

You can see a live map of the received APRS traffic in the top menu under the menu item DO0ZA. The map view is realized using a modified version of polaric aprsd. Many thanks to LA7ECA for supporting me with some input and bugfixes.

A lot of articles you find on the blog are based on steps I had top take to build the station. If you are interested in more details just leave me a message!

The next step is defiantly the NPR Setup. A single modem setup for range tests is already in place. The final setup approved by BNetzA for DO0ZA will be based on two NPR-H modems by DO5DSH and goes on-air as soon as I received the required multiplexer. The HAMNet IP range (44.130.224.112/28) is already approved by AMPRNet.

This site uses Akismet to reduce spam. Learn how your comment data is processed.

We use cookies on our website to give you the most relevant experience by remembering your preferences and repeat visits. By clicking “Accept All”, you consent to the use of ALL the cookies. However, you may visit "Cookie Settings" to provide a controlled consent.
Cookie SettingsAccept All
Manage consent

This website uses cookies to improve your experience while you navigate through the website. Out of these, the cookies that are categorized as necessary are stored on your browser as they are essential for the working of basic functionalities of the website. We also use third-party cookies that help us analyze and understand how you use this website. These cookies will be stored in your browser only with your consent. You also have the option to opt-out of these cookies. But opting out of some of these cookies may affect your browsing experience.
Necessary Always Enabled
Necessary cookies are absolutely essential for the website to function properly. These cookies ensure basic functionalities and security features of the website, anonymously.
Functional
Functional cookies help to perform certain functionalities like sharing the content of the website on social media platforms, collect feedbacks, and other third-party features.
Performance
Performance cookies are used to understand and analyze the key performance indexes of the website which helps in delivering a better user experience for the visitors.
Analytics
Analytical cookies are used to understand how visitors interact with the website. These cookies help provide information on metrics the number of visitors, bounce rate, traffic source, etc.
Advertisement
Advertisement cookies are used to provide visitors with relevant ads and marketing campaigns. These cookies track visitors across websites and collect information to provide customized ads.
Others
Other uncategorized cookies are those that are being analyzed and have not been classified into a category as yet.
SAVE & ACCEPT